Our websites use the analysis software Matomo for the statistical evaluation of visitor access.

The LWL Visitor Centre in the Kaiser Wilhelm Monument offers visitors not only information about the monument but also surprising insights into the eventful past of the Wittekindsberg hill.

Anyone who has ever wondered why such a monument was built high up on the hill will find an answer to their question, as will those wanting to know why there are also numerous archaeological sites waiting to be discovered. Historians, archaeologists, conservationists and custodians of local culture have compiled interesting stories for each of the media stations. The presentation’s six media stations convey their message using vivid illustrations, animations, photographs, short texts and interactive sequences about the natural and cultural history of Porta.

1. In the entrance area visitors immediately encounter the “Kaiserliche Aussichten” (views from the Kaiser), a wall of imagery comprising around 40 souvenir photographs of visitors from differing decades. These images originate from visitors from all over Germany, who have sent in their photographs of excursions to the Kaiser Wilhelm Monument, following a call in the media. The respective photographs are accompanied by information concerning when and for what occasion the photographs were created and who the people on display are.

In addition, there is an information screen with up-to-date news as well as a media station for the Henssgen photographic studio in Barkhausen, which has been photographing visitors to the monument for over 50 years.

2. The “Rondell” (circular) media station consists of circularly arranged displays and dedicates itself to the monument from the perspectives of Kaisers (William I and II), the monument itself and the public. Within the circle of displays, these three topics are further explored by means of texts and a collage.

The erecting of the monument at Porta in 1896 served to honour both Kaisers, it not only celebrated the unification of the German Reich in 1871, as personified by Wilhelm I, but also Wilhelm II, to whom the initiators of the monument also paid homage in the hope that it would be positively received by him.

After the death of Wilhelm I, a large number of monuments were created in the provinces of the German Reich, mainly at the behest of the middle classes. In glorifying Wilhelm I, as founder of the Reich, the initiators also combined a desire for recognition and goodwill from Kaiser Wilhelm II. The Kaiser Wilhelm Monument proved, even during its construction, to already be a major public attraction, resulting in monument souvenirs and a variety of “Kaiser kitsch”. Following the end of the First World War in 1918 however, enthusiasm decreased and the abdication of the monarchy ensued. Kaiser Wilhelm II fled into Dutch exile. But whilst the political significance of the monument changed, its impact on tourism remained.

These three perspectives on the monument are also embodied by actors in a media station located on the external wall of the circular display. Whilst Kaiser Wilhelm II speaks from memory at the end of the 1890s, the mayor of Minden Theodor Bleek (1833-1905) talks about the event from a distance of about one or two years, and Henny, a maid, talks in 1921, following her experience of the First World War.

Finally, to the side with the windows, four large-scale backlit images complement the circular display, summarising information on the subjects of the “Kaiser”, “Porta Stone”, “Nature” and “The Monument”.

3. The “Panoramawand” (panoramic wall) is a central element of the presentation. At 17.50 metres in length, it stretches almost the entire length of the LWL Visitor Centre. The large-scale illustration depicts Porta as a historical and cultural landscape in 34 individual scenes.

The viewer walks along the panoramic wall on a journey through time in the region, from the Jurassic, the geological origin of Porta sandstone, which was destined for large-scale export, via changes in the landscape, how the first humans lived at Porta, the Romans, Charlemagne and the founding of the diocese of Minden, up to the development from Medieval transport to modern transport systems.

The visitor is able to vividly follow industrialization during the 19th century and booming cigar production, the introduction of mechanical textile production, but also the mining of ore in a kilometre long tunnel system beneath the Wiehengebirge hill. During the Second World War, forced labourers worked for the defence industry in the tunnels, and for the war industry under the Jakobsberg and Wittekindsberg hills.

Continuing on the journey, the panoramic wall shows the demolition of the armaments tunnel and finally the development of the village of Porta Westfalica into a town, complete with structural changes and the creation of a nature reserve from the former gravel pits 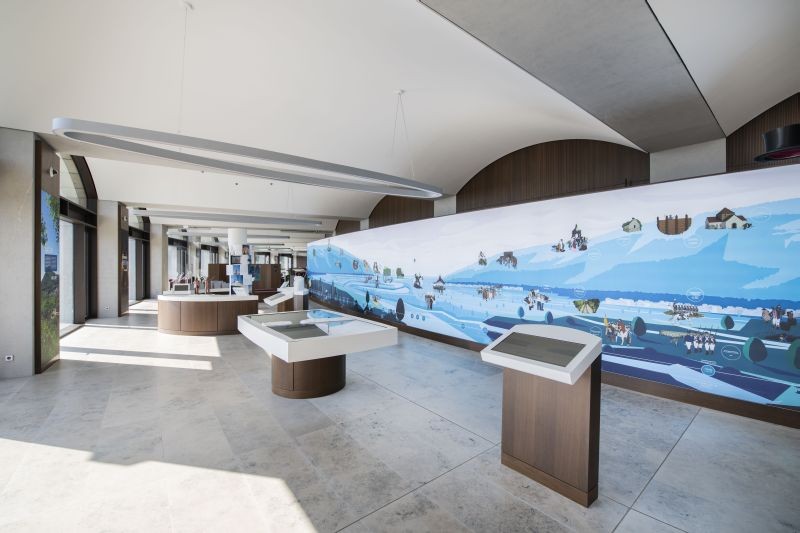 4. The “Geomodell” (geo-model) media station is an interactive map, providing an overview that deals with the subjects of geology, nature, economy, nature, transport and human settlements around Porta.

By accessing the levels “information” and “current news”, visitors can obtain specific information, such as the geological formation of the so-called “Hausberger Schweiz”, a hiking and recreational area formed by the melting of Saale glaciation.

In addition, the model presents the opportunity of experiencing the one thousand year history of the mill industry along the so-called Westphalian Mill Route, which connects mills across more than 320 kilometres along the Wesergebirge and Wiehengebirge hills. The mill area of Minden-Lübbecke still boasts 43 wind, water and horse driven mills.

Further subjects include the history of the Kaiser Wilhelm Monument, from being a regional landmark to its renovation and reconstruction, and the “Holzhauser Mark” sand pit in Porta Westfalica-Neu-Costedt, which became a natural conservation area in 1992, the nature reserve „Vogelparadies Porta Westfalica“(Porta Westfalica Bird Paradise), or even the Mittelland Canal and the waterway junction in Minden which was developed from the original course of the Weser river.

During the 19th century, more monuments were created in Germany and neighbouring European countries than ever before. The monuments in honour of monarchs as well as national luminaries sought to strengthen the national sentiments of their respective populations. Since then, not only has the form and type of monuments changed, but also their message.

The media stele also addresses the culture of international monuments, their imagery, and the resulting discussions they provoke as elements of their overall impact. The monuments included range from the Hermann Monument in Detmold, the Arc de Triomphe in Paris to the Democracy Monument in Bangkok.

The public too, can actively participate in the debate: at the media station, visitors to the LWL Visitor Centre are welcome to express their opinion on the culture of monuments in a questionnaire, answering such questions as: “What significance do such monuments to historical figures and events have for you personally?”

6. At the “Film” media station, a short film introduces the eventful history and social interpretations of the Kaiser Wilhelm Monument. In just under nine minutes, the film, using innovative and vivid documentary material as well as sequences derived from the style of graphic novels, embarks on a journey through time, covering the more than 120 year history of the monument. Beginning from the initial idea of a Kaiser Wilhelm monument to strengthen the national sentiment, the film covers its construction, pompous inauguration, role in the Nazi era, culminating in its development as a tourist attraction and the meaning of such monuments in today’s world. In entertaining scenes, actors embody contemporaries and explain details and the background to events, such as a labourer explaining the building work and construction of the monument.

A cookie is text information that the visited website places on the viewer’s (‘client’) computer through the web browser. The cookie is either sent to the browser by the web server or generated by a script (possibly JavaScript) in the website. The client sends the cookie information to the server again with every request on later new visits to this site. To offer you a more pleasant experience, we use cookies to save your language settings, for example, or to collect anonymous statistical data that we can use to optimise the user experience/ergonomics on our online services.

Listed below, you’ll see cookies divided into categories; you can select or deselect categories by using Opt-in.

These cookies and services are necessary for you to visit our online services and use their features. Without them, you cannot use services, such as login (sessions), language settings, shopping cart and privacy settings, as well as services related to security. Except for login (sessions), no information of a sensitive nature that can be used to identify you will be collected.

These cookies and services collect information about how you use our online services, such as which functions and pages you use most often. This data can help us optimise our online services, for example, or simplify navigation. They are also used to inform partners whether you reached our website through a partner site, and whether your visit led to using one of our offers; however, no information will be recorded that can be used to personally identify you.