Ok Learn more Our websites use the analysis software Matomo for the statistical evaluation of visitor access.

Shortly after the death of Kaiser Wilhelm I (1797-1888) on 9 March 1888, numerous plans were hatched to erect a memorial to the first German Emperor and King of Prussia. The Provinzialverband (Provincial Association), the predecessor of today’s LWL, likewise planned such a memorial and decided in 1889 by 43 to 36 votes on Porta Westfalica (the ‘Westphalian Gap’) as a site and natural landmark which could create a visual impact over a wide area. It was designed by, the still young but much sought after, architect Bruno Schmitz (1858-1916). In an 1890 competition his proposal was selected from amongst 56 candidates. The seven metre high statue of the emperor was conceived by the Viennese sculptor Caspar von Zumbusch (1830-1915), originally from Herzebrock. 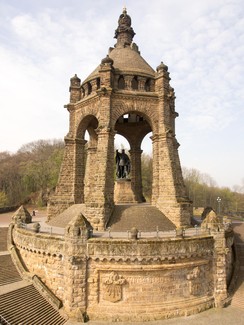 A Monument with Panoramic Views

Constructed in just four years, the Kaiser Wilhelm Monument was erected at an altitude of 268 metres on the Wittekindsberg hill in Porta Westfalica.
Built in “Cyclops style”, the monument is 88 meters high from the foot of its rotunda base to its summit, making it the second highest monument in Germany. Over 100 workers were, at times, employed on the construction site, laying 13,000 cubic metres of sandstone and 3,000 metres of steps using the natural rock as a substructure. Porta sandstone from a nearby quarry was employed for all visible architectural elements. 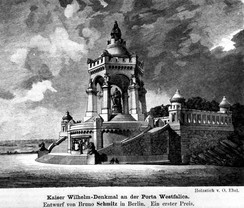 In the following years, the surrounding ground was exposed to substantial stress. Subsidence already began to occur during construction of the rotunda terrace, in the ground as well as within the 26 m high stone filling. Large bulges in the terrace wall ruptured in 1912, allowing stones to fall down the slope. The construction costs were estimated at the time to be one million marks (which in today’s terms would be approximately €9.9 million).

The “monument tunnel”, almost 100 meters below the monument, measured about 90 meters in length and 16 meters in height; further enlargement was terminated when the construction of the monument was completed. It was only at the end of the Second World War that the Nazis constructed reinforced concrete ceilings and stairs, and converted the tunnel, known as “Stöhr 2”, for use as an armament production facility on four levels.

From autumn 1944 to April 1945, forced labourers produced armaments there for the Luftwaffe. Under the administration of the British Army of the Rhine, the entrance to the tunnel was detonated in 1946, causing a large part of the ring terrace to slip. The monument itself, apart from traces of artillery shelling during the war, remained undamaged.

In 1956, the damage was repaired and the platform significantly reduced. Ever since its inauguration, the monument with its magnificent views over the Weser Uplands and the North German Plain had been a popular destination for excursions. A kiosk area in the car park developed over time into one for more elaborate catering around the monument, which continued to expand over the decades. However, the infrastructure became increasingly out-dated and its attractiveness dwindled over the years, leading to the closure of the facilities.

The Kaiser in a New Guise: Restoration and Redesign

After nearly 120 years, “Willem” required a contemporary rejuvenation. In 2015 LWL, as its owner, decided to upgrade the monument, by carrying out the necessary restoration, to include a new restaurant and visitor centre. To this purpose, the association launched a competition involving 15 architectural firms, which conceived ideas for the future use of the monument area. The Peter Bastian architectural office in Münster won from among the designs submitted.

Within 18 months, the Kaiser Wilhelm Monument was extensively renovated for its re-opening on 8 July 2018. The elaborate reconstruction of the original rotunda terrace involved large quantities of cement. At a depth of up to 30 metres, the restored rotunda base consisting of Obernkirchen sandstone is now ready to be seen. Above the pedestal, the restored arches extend upwards as viewing windows for a future restaurant. In total, more than 1,500 tonnes of natural stone were worked by hand.

An Overview of the Architectural History:

1890 Competition for the design of a Kaiser Wilhelm Monument

1912 Stones began breaking away from the terrace wall

1944 Armament production in the tunnel under the monument

2018 The Kaiser Wilhelm Monument, including a new visitor centre, reopened on 8 July