Ok Learn more Our websites use the analysis software Piwik for the statistical evaluation of visitor access.

History of the Monument 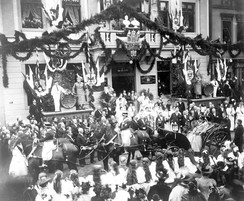 The grand inauguration took place on 18 October 1896, the anniversary of the Battle of Leipzig (18 October 1813) and also the birthday of Kaiser Frederick III (18 October 1831). Kaiser Wilhelm II and his wife Kaiserin Auguste Victoria, along with the General Staff, aide-de-camp, ladies-in-waiting and chamberlains travelled to the event by train. A chartered train took them to Minden and from there they were conveyed by horse and carriage to Porta Westfalica.

On the monument’s rotunda terrace, the Regent inspected the assembled military detachment, welcomed the representatives of the province of Westphalia and delivered his inauguration speech. Militia, civic associations, schools and employees of local companies were also represented. The Kaiser’s inaugural speech was followed by a celebratory feast with an accompanying programme of music. However, the imperial couple and their entourage did not take part in the “feast for the inauguration of the Kaiser Wilhelm Provincial Monument”, comprising 370 invited guests in the newly constructed grand reception room at Hotel Kaiserhof at the foot of the monument.

Further information concerning the history of the Kaiser Wilhelm Monument is available on the Internet from the “Westfälische Geschichte” portal: http://www.westfaelische-geschichte.de/web619